Teleworking: The myth of working from home

22 Mar Teleworking: The myth of working from home

Yahoo has banned its staff from “remote” working. After years of many predicting working from home as the future for everybody, why is it not the norm?

When a memo from human resources dropped into the inbox of Yahoo staff banning them from working from home it prompted anger from many of its recipients.

“Some of the best decisions and insights come from hallway and cafeteria discussions, meeting new people, and impromptu team meetings,” the memo said.

“Speed and quality are often sacrificed when we work from home.”

The move to get staff back into the office from June this year is thought to have been driven by new chief executive Marissa Mayer, who herself returned to work weeks after giving birth.

Virgin entrepreneur Richard Branson, who spends much of his time working on Necker Island in the Caribbean, was quick to respond, calling it a “backwards step in an age when remote working is easier and more effective than ever”.

People in the West are constantly bombarded by news about technology that makes it easier to communicate with the office. Many have fast broadband and webcams that allow their faces to appear through the ether at any important meetings. They are surrounded by smartphones, laptops and tablets.

Everything is surely there to free them from the daily commute. Those in manufacturing or retail might always have to be present, but in an age when so many work in offices, why can’t they have their office space at home?

There are signs that the number of people working from home is on the increase in the UK, according to the CBI. A total of 59% of employers who responded to a survey in 2011 were offering teleworking, up from 13% in 2006.

In the US, 24% of employed people report working from home at least some hours each week, according to the Bureau of Labour Statistics.

But only 2.5% of the workforce (3.1 million people, not including the self employed or unpaid volunteers) consider home their primary place of work, says the Telework Research Network.

Yahoo is not a lone voice in espousing the virtues of physically being in the office.

Only last week Google’s chief financial officer Patrick Pichette said when the company is asked how many people telecommute, their answer is “as few as possible”.

Google workers are provided with a free wifi-enabled bus in to the HQ. Mayer, of course, is a former Google executive.

There are obvious reasons why working from home has not proliferated in the way people thought it might. There is still ingrained cultural antipathy. 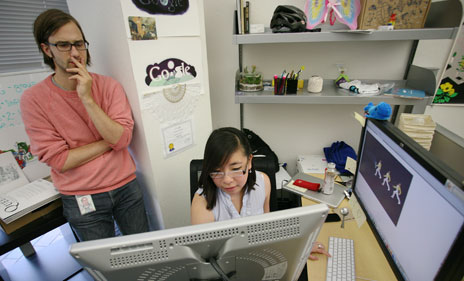 Google, like Yahoo, prefers its workers in the office

Not “being seen in the office” may affect a person’s chances of promotion, result in a smaller pay rise than office-based peers and lower performance evaluations, according to research by the London Business School and the University of California.

They stress the continuing importance of so-called “passive face time” that is being in the office, regardless of what someone is doing.

The additional pressure not to be perceived as “skiving” may drive those who do work from home to exceed their hours.

Prof Jennifer Glass, co-author of a report on the US workforce published by the University of Texas at Austin, says for many people, especially those in their 30s and 40s, teleworking is part of their work after they have already done 40 hours in the office.

Glass was “flabbergasted” by the Yahoo memo. “This seems to be trying to bring Yahoo in line with corporate America, not high-tech industries,” she says.

“The idea that this is going to promote more innovation seems bizarre.”

Promoting the value of interactions in hallways and canteen seems strange at a time when face-to-face contact within the office is decreasing.

“I frequently email someone without getting up to see if they are there,” Glass notes.

Managers can be biased in favour of those they can actually see working.

“There is this attitude that managers need to see people are close by and that those workers are more productive,” says Glass. “It is a natural tendency to want to control things.” 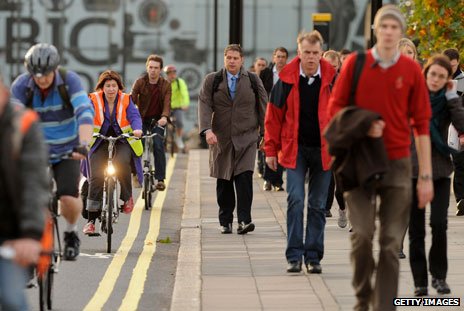 One perk of teleworking is no more commuting

This seems outdated to many. “The best employers don’t overlook staff because they are not in the office. That strikes me as yesterday’s way of working,” says Paul Sellers, policy adviser at UK trade union umbrella group the TUC.

Dame Stephanie Shirley, who pioneered home working in the computer industry in the early 1960s, says the concept has not taken off in quite the way many predicted at the time.

“Academics were predicting it would become more acceptable. Town planners were starting to incorporate the idea of home working into their designs. It felt like the beginning of a different kind of society.”

When she started her company F International in 1962, the idea of people working from home was alien to most businesses. Offices were highly regimented. Some of the company’s programmers did not even have home telephones.

Workers were used to signing in and having their output closely supervised. “It was about the time you were present, rather than what you had achieved,” says Dame Stephanie.

By the mid-1980s F International was a pioneer of teleworking employing 800 home workers and turning over nearly £20m a year, and was setting up a national electronic mail network to link workers’ home computers to the company’s minimal headquarters.

Dame Stephanie said she was on a “crusade” to find skilled work for women who had left the workplace to start families or look after relatives.

But social changes can take longer than expected, says the 75-year-old, who quit the industry in 1993.

Decades later the issue has not gone away. Working from home still has its image problem.

London Mayor Boris Johnson once joked: ‘We all know that is basically sitting wondering whether to go down to the fridge to hack off that bit of cheese before checking your emails again.”

For Alan Denbigh, co-author of The Teleworking Handbook and former executive director of the Telework Association, there are proven benefits of home working. “It gives you the opportunity to get on with a particular project and for those who are bringing up small families where it is imperative to have a degree of flexibility it works.”

Having done both he does not recommend working from home exclusively, recognising the benefits of interacting with people in the office and the pitfalls of working long hours at home to keep up.

But he says it is “equally ridiculous” to feel you have to be at the office every day. He recommends a bit of both.

“A large corporation saying you can’t work at home, especially an IT based company, seems counter-productive. You have to treat people as grown-ups.”